What is an affective disorder?

Bridie is an experienced writer with varying experience in a few different disciplines. She has worked across the public sector in communications, news, magazines, lifestyle, travel, beauty, general blogging, biography writing, music bios, music publicity and much more. She is a qualified journalist and writer who is currently working in the public sector as a communications advisor as well as music publicity.

Affective disorders also known as mood disorders are a set of mental disorders that seriously impact a person’s mental state, how they do things, how they go about life and how they cope with life in general. These disorders can range largely in symptoms and are most commonly known to people as bipolar and depression. Affective disorders often manifest as extreme mood changes from one end of the symptoms being extremely elevated to irritable moods with hyperactivity to inflated self-esteem. Alongside the highs of an affective disorder are the lows or depressive states, dejected moods with disinterest in life, sleep disturbance, agitation, and feelings of worthlessness or guilt. People with an affective disorder may or may not have psychotic symptoms as well such as delusions, hallucinations, or other loss of contact with reality.

Whilst often categorised into two main disorders, depression and bipolar, there are different types of both which can affect people, of course, these are also not limited to just these, for example, postnatal depression, occurring post birth. 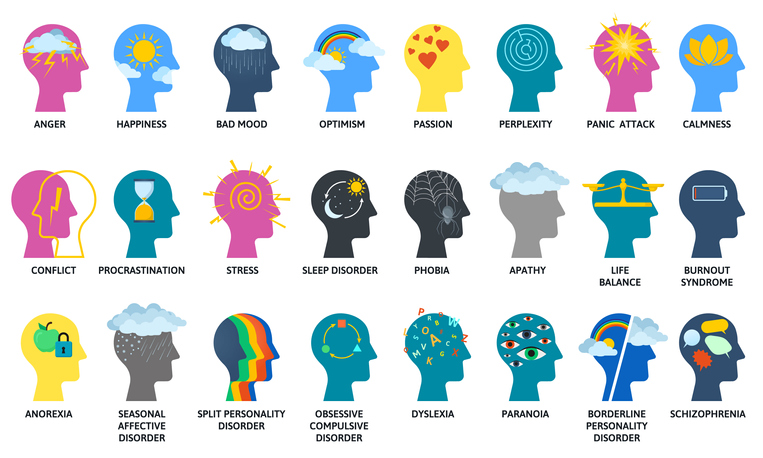 The same goes for bipolar

Medical communications have claimed that according to Psychiatric Clinics of North America, affective disorders impact at least 10% of the adult population in the US and, 80% of people in the US with depression-like symptoms are not being treated within the healthcare system for their potential affective disorder. The occurrence of affective disorders in people can stem from a number of things but is more often seen in women  there is speculation that this is connected to female sex hormones like estrogen, however, the relationship between these hormones and whether or not a woman experiences depression is complex and needs more research. Women also experience specific types of major depression disorders that do not occur for men, including premenstrual dysphoric disorder, premenstrual syndrome, and postpartum depression.

The reasons why people have affective disorders is not fully something that is understood. We do know, however, that neurotransmitters and brain chemicals play the major role in why our moods are affected. When they become imbalanced for some reason or can’t send signals to our brains it can result in an affective disorder. Sometimes, major life events or trauma can trigger depression, bipolar or other mental disorders and the use of drugs and alcohol over a prolonged period can also trigger it. There is also evidence that stipulates it can be genetic and inherited from a parent. These may be factors as to why these disorders develop but it can also occur in people without a link to anything.

Through substantial lifestyle changes, therapy and/or medication people can find themselves living quite normally with these disorders. It can be a hard road however, finding and trying different medication in order to find the right one and so the therapy and lifestyle changes alongside the medication is a must. Some kinds of depression can also be treated with vitamin D supplements and light therapy, which is supplied by specialised lamps. Whilst the advice from medical communications and different medical agencies can be overwhelming, the best course of action is speaking to a medical professional who can offer proper advice on who to see and how to approach whatever affective disorder people may be experiencing.